Misfits don’t fit the traditional mold. For this reason, they are judged and misunderstood by others. If they can learn to get comfortable with what makes them different from others and hone their strengths, misfits end of up winning in the game of life. (Estimated reading time: 4 minutes)

“Why fit in when you were born to stand out?”

“Misfit: In the school social classes of today, a misfit doesn’t fit into any one quite right, not even the outcasts, but may have qualities of each one. True misfits usually do not believe they are emo or goth, and they are usually introverts. Misfits tend to follow their own beliefs, and are usually persecuted for it. Misfits tend to be hated for no reason, have few good friends, and are usually intelligent and mature, and sometimes sort of insane and depressed. Misfits tend not to care about their bad social lives, but some do.” –Urban Dictionary.com

Ever since the dawn of civilization, social and political institutions have actively suppressed anyone who posed a threat to the established order. This often included innocent people who engaged in non-criminal activities.

These individuals were vilified for their radical ideals and beliefs because it didn’t follow the status quo. Their convictions were so powerful that they created revolutions that shook up entire regimes.

The classic historical misfits include gypsies, freedom fighters, heretics or pagans—anyone who chose not to follow the norms and customs of society. They were persecuted for their choices, and some even faced severe sentences such as death by hanging, beheading or being burned at the stake.

Indeed, the price of being a misfit was very high during eras where monarchies, dictatorships and non-secular states prevailed. Fortunately, we have evolved since then. We now live in a time where individuality and originality is encouraged and even rewarded in most parts of the world. 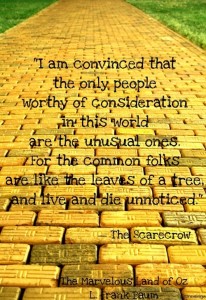 However, despite this shift, an undercurrent of conformity still lingers within our social and communal molds. These influences originate from the same fear-based thought pattern that our ancestors had to contend with.

I’ve always been sensitive to the self-imposed limitations created by fear. I’ve seen how it’s made so many people in my immediate environment give up their dreams and play small. It’s a common occurrence in my culture where “fitting in” and compromise is a favored.

As a bona fide misfit, I’ve always had a birds-eye perspective on this matter. For this reason, I’ve never been afraid to question tradition, and develop my own belief system. But my individualistic streak did not come without a price.

It took many years to accept this part of me and realize that the path of a misfit is not an easy one. It’s a tricky terrain filled with obstacles, resistance, and frequent feelings of isolation (until you find your tribe).

You will have to learn how to swim upstream and go against the currents of “sameness” in the river of life. This requires a great deal of courage, faith and a willingness to listen to your own inner voice.

History is filled with luminaries who were considered misfits during their time, such as Mahatma Gandhi, Martin Luther King, Steve Jobs and Einstein (to name a few). It was only after much struggle and strife that they were applauded for their heroic acts and innovations.

What fueled their achievement was a relentless passion to express their personal truths in a way that could benefit humanity. This relentlessness is a defining characteristic of misfits which gives them an incredible edge in life. The key is learning how to channel this energy in a positive way and into a worthy cause.

Here are reasons why I think misfits usually end up winning in the game of life:

1. They have more fulfilling lives because they listen to their hearts calling: Because misfits are not easily influenced by others, they are more likely to act on their heart’s desires. This almost always results in a life that is more satisfying and fulfilling.

2. They are the creators and innovators of our society: Creativity and innovation are born from unconventional thinking. For this reason, misfits usually make significant contributions that are born from the fertile recesses of their mind.

3. They’re less likely to be targets of abuse and manipulation: Most misfits are deeply self-aware and have high emotional intelligence, making them less favorable targets for manipulators and abusers who prefer to prey on the weak.

4. They are compassionate individuals: Misfits know what it feels like to be considered different and be rejected by others because of it. For this reason, they’re more sensitive to pain and suffering of others who are less fortunate.

5. They make great leaders: The immense strength and boldness of a misfit often makes them charismatic and inspiring to many. When their vision is backed with good intentions, they can lead others towards progress and a better way of living.

So, if you feel like a misfit in your world right now, I say be strong and celebrate whatever you believe makes you different from the people around you. Use your unique gifts and sharp mind to cut through the tightly knit fabrics of a society bound by fear.

Focus on building your inner strength and developing your talents because the world needs you to step into your greatness and be the magnificent person that you were born to be.

Question for you: Have can you begin to accept the unusual parts of yourself strengths? Could it be a reflection of you authentic self and your purpose in life?