We’re told that the only way to find our life purpose is to pursue an interest that we’re passionate about. While this may work for some people, it may not for others. Fortunately, there are other unconventional ways to find your life purpose and discover your life’s work. These techniques defined the path of many famous people in history. (Estimated reading time: 4 minutes)

“The mystery of human existence lies not in just staying alive, but in finding something to live for.”

‘Finding your purpose’ has become a popular catchphrase in our culture of self-empowerment. Self-help gurus encourage us to forge a path that’s meaningful and which reflect on our core values.

Distinguished psychologists, such as Abraham Maslow, have postulated that living a life of purpose is essential to fulfilling our need for self-actualization, where we can realize our talents and potential.

According to Maslow’s Hierarchy of Needs, it’s the final level of psychological development that can be met once our basic needs are met. Fulfilling this need leads to a life of creativity and fulfillment.

Today, most people living in developed countries have their basic needs met due to modern conveniences and technology. This has allowed many of us to evolve and become more attuned to our natural yearning for purpose

This rise in consciousness has led to an ubiquity of books and blog articles to show people the way and demystify this esoteric concept. In fact, I myself was preoccupied with discovering my purpose for many years.

Most of the books I read espoused that our purpose is directly connected with the interests and vocations that we’re passionate about and wouldn’t mind losing ourselves in for hours at stretch.

It seems fairly simple and straightforward but it doesn’t seem to be working for everyone. While this may be the key that unlocks the door for some people, it may not be the case for others, due to these two reasons:

– They don’t have one specific hobby or interest that they’re passionate about.

– They lack the motivation to engage in the process of self-discovery.

So what do you do if you happen to fall into this category?

Are you doomed to live a mundane and mechanical existence without the satisfaction that comes from living a purpose-driven life?

The answer is no. You’ll find it reassuring to know that many prominent figures in history stumbled upon their life purpose in unconventional ways. Here are some famous examples:

Martin Luther King: He resented the racial humiliation that his family faced while growing up in the segregated American south. He also lost a friend in his segregated school because the friend’s parents did not want their son to play with a black kid.

Mother Teresa: She became convinced at age 12 that she would commit her life to a religious path after listening to stories of missionary services that took place in Bengal, India, which fascinated her.

Einstein: He met a Polish medical student named Talmud in his early teens who became an informal tutor to him. Talmud introduced Einstein to a children’s science text that inspired him to inquire about the nature of light.

Michael Jackson: His father, Joseph Jackson, was a guitarist but put aside his musical aspirations to work as a crane operator to support his family. He believed that his sons had talent and molded them, including Michael, into a music group that became The Jackson 5. 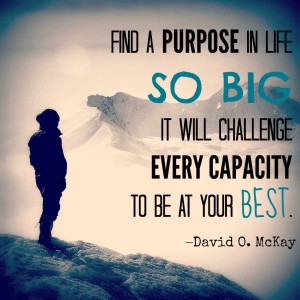 These exemplars demonstrated the many ways by which we can find purpose. Here are three alternative ways to find your life purpose that might work for you:

1. Fulfilling needs of your immediate environment: People who have lived through major global crises such as the World Wars, or found themselves in the midst of environmental disasters such as the Tsunami in South East Asia in 2004, or those who encountered grave injustices that were often seen in colonized countries, felt morally obligated be part of the solution to these weighty problems. Even if we don’t live in an era or region facing pronounced calamities, we can still get involved in our neighborhood or communities in a purposeful way. Once we identity the problems and the issues that exist in our surroundings, we can find ways to contribute towards alleviating them using our talents and skills.

2. The things that frustrate you or make you mad: When you read or watch the news, are there certain headlines that tend to draw your attention simply because they irk you? You may feel something being stirred up within you and you’re enraged because, for some reason, this issue feels deeply important to you. Maybe it’s related to global warming, women or child abuse, economic disparity, racism or environmental pollution. Whatever it is, if it has an emotional charge behind it, you need to pay attention to it. It could be a strong indicator of a matter that you can potentially spearhead.

3. Following your curiosities and inspiration: I picked up this genius yet surprisingly simple idea from Elizabeth Gilbert’s book, Big Magic. In her book, she asserts that a more elegant and less stressful way of living purposefully, is by always following our curiosity. She says, “Passion is a tower of flame, but curiosity is a tiny tap on the shoulder — a little whisper in the ear that says, ‘Hey, that’s kind of interesting…’.” So if you’ve always wanted to learn more about astronomy or learn how to paint, garden or do the foxtrot, do it, because you never know where the treasure trail will lead you and the kind of impact these activities will have on you.

No matter what you do for a living, whether you run a corporate empire or sweep streets for a living, you have an important role to play in the world. Don’t let the superficial parameters of money and fame delude you into believing that your role doesn’t matter – because it does and always will!

Question for you: Have you found your purpose yet? If not, are you willing to try any of these ways to find your life purpose?