Our shadow self can cause us to sabotage our efforts to get over unhealthy patterns. Facing our shadow requires that we become aware and acknowledge the parts of our us that we’re not proud of. Learn how to balance your shadow self with the other aspects of your personality with these techniques. (Estimated reading time: 6 minutes)

“A man is whole only when he takes into account his shadow.”

“The shadow is the unknown ‘‘dark side’’ of our personality–-dark both because it tends to consist predominantly of the primitive, negative, socially or religiously depreciated human emotions and impulses like sexual lust, power strivings, selfishness, greed, envy, anger or rage, and due to its unenlightened nature, completely obscured from consciousness.” – Carl Jung

Have you ever said or done something irrational, even though you knew that it was unethical, mean or potentially harmful?

I suspect that your answer is a resounding “yes!”

Perhaps you ate a whole stack of chocolate chip cookies right after committing to a healthy eating regimen. Or you intentionally blurted something hurtful to your partner during a spat with him or her. Or you fell back into smoking or drinking again after quitting for a few months.

This insidious part of you seems to have a mind of its own and is frustratingly hard to control. On a conscious level, you know what’s right and what’s wrong, but that doesn’t stop you from acting on impulse.

A battle may ensue between your logical and emotional sides and, most of the time, the emotional part triumphs. To understand why this occurs, we’ll have to take a closer look at the anatomy of our mind.

The unconscious mind is submerged in the deep recesses of our minds, which makes it harder to access and understand its complex functioning. The subconscious mind is also the home of our shadow self. 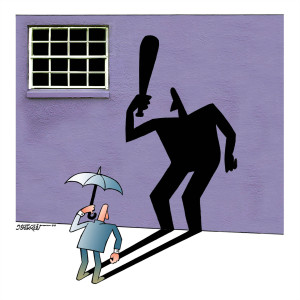 Our shadow is an entity composed of painful memories and unhealthy beliefs. Like Pandora‘s Box, it houses the most repulsive and unpleasant parts of our being that we prefer not to confront.

Dealing with the shadow was a major preoccupation of our ancestors. They were acutely aware of its impact on their outlook, as noted in the diaries of many notable literary and religious luminaries.

In our modern world, people are just too busy or indifferent to do the inner work that’s needed to diffuse it’s energy. However, this unpleasant facet of ourselves will continue to rear its head and affect us if we ignore it.

If you suspect that your sensibilities are being overpowered by your shadow, it’s essential that you apply ourselves to the healing process, no matter how daunting it may seem.

Shadow work, can often seem like a sticky and uncomfortable process, but if done right, it can be cathartic and release us from being a captive of our own irrational compulsions. We also become more accepting and understanding of the flaws that we witness in other people.

According to Debbie Ford in her pioneering book, The Dark Side of the Light Chasers, “embracing these negative qualities actually opens the door to happiness, fulfillment and true enlightenment. Our dark sides are part of who we truly are. By uncovering and embracing our shadow side, we become whole.”

The key to managing our shadow self is by facing it head on and then balancing it with the other aspects of our personality. Here is a simple outline of the techniques that you can use to work with your shadow:

1. Engage in deep inner work: If we want to get acquainted with the shadow aspect of our psyche, we should be willing to fearlessly delve into the hidden and unexplored depths of our being. We need to excavate psychological wounds from childhood and other painful experiences that we have repressed. With the help of a qualified therapist, we can scrutinize the feelings, fears, beliefs and traits that we have avoided. This work is critical because whenever we disown any part of ourselves, we essentially stunt our potential and creativity, which limits our progress.

2. Watch your behavior patterns: Collect real time data on your behavior patterns by observing your thoughts and actions. Watch out for any discrepancies and any deviations from your normal and preferred ways of being and take note of it in a journal. If you do this consistently, you’ll gradually see some patterns emerging and you’ll get insights into the characteristics and triggers of your shadow self. Try to stay objective during this process and avoid berating yourself if you see something you don’t like.

3. Be aware of your projections: Whenever we criticize or judge others for being or acting in a certain way, it’s almost always an indication of a shadow aspect of our personality that we’re not accepting. In other words, whatever we repress in ourselves gets projected on to other people. That particular quality or behavior that gets on your nerves is a clear sign that you’ve not owned that quality within you.

For example, a lot of people see a famous figure such as Donald Trump as being loud, brash and pretentious, while others see him as being confident, strong and capable. This variation in opinions occurs because people are unconsciously driven to form opinions based on their unique projections.

4. Channel your shadow through your creativity: We’re accustomed to believing that the shadow only manifests itself in negative ways such as in acts of violence, aggression and crime. However, the shadow can also be channeled in positive ways as well. Various artists have found ingenious ways to express their dark side through their specific art forms. Fashion designers created gothic inspired clothing lines, film directors created film noir movies in the 1940s-1950s, and authors have written dark thriller novels such as Silence of the Lambs and Gone Girl. Try experimenting with different creative portals to see which one appeals to you the most.

5. Be kind to yourself: It’s critical that you avoid judging yourself while being immersed in shadow work. It can be a challenge to look at the ugly parts of us without having feelings of shame and repulsion coming up to the surface. It may awaken your inner gremlins, which can generate a litany of harsh criticisms. Remind yourself that confronting your shadow is an act of self-love and courage, which you’re embarking on to improve the quality of your life and to become a better human being.

Question for you: What’s the biggest challenge that you encounter when facing your shadow self? How is it affecting your life?