Anyone who cares enough can make a meaningful impact in the world. The scale doesn’t matter, as long as we do it from our heart and we devote ourselves to what matters most to us. These five steps will help you come up ideas for how you can make a difference. (Estimated reading time: 8 minutes)

“Success isn’t about how much money you make; it’s about the difference you make in people’s lives.”

The lights dimmed as a group of children were ushered onto the stage. An audience of approximately 31 million tuned in from around the world to bid farewell to arguably one of the greatest, and possibly the most controversial, musical artist of all time. They waited in anticipation.

The golden casket glistened under the spotlight, reminding us of Michael Jackson’s status as entertainment Royalty. Singer Judith Hill glanced at the casket with a look of reverence as the first chords of Heal the World began playing. Her grip on the microphone tightened as she prepared to enchant the world with her emotional tribute to the musical legend.

Those words reverberated from the Staples Center Arena in L.A., straight into the hearts of the viewers. Michael’s family and friends, joined hands with each other as they sang along. The somber and melancholy sentiments instantly shifted to one of celebration and unity. Even though Michael was gone, his message of peace, love, and generosity is still alive and will continue to influence many more generations to come. His life has a meaningful impact that will last for many years to come. 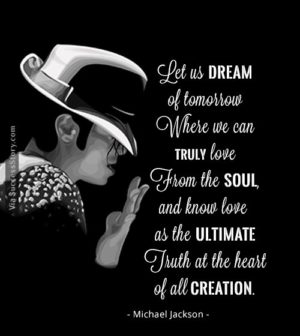 I was deeply moved by the event. It was the catalyst for me to seriously question my contribution to the world. Like many others, I was caught up in my own worries, and my attempts to stay afloat in the emotional whirlpool I was drowning in. I didn’t have time to think about changing the world because I was busy dealing with my own “stuff”.

I know many people who are in the same situation. Just surviving and earning their paycheck. It can be overwhelming to reflect on the problems of the world when there are so many demands and responsibilities in your life already. Even though most people have good intentions, they simply aren’t motivated enough to pursue altruism.

Deep down, all of us want to feel like we’ve made a difference; that we somehow mattered in the grand scheme of things. We want to give our lives meaning and purpose by leaving the world a better place. Yet we feel inhibited. We fear that we don’t have what it takes to make positive change. 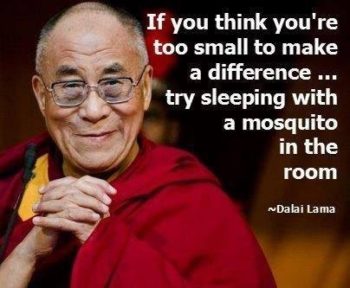 When people think of creating a meaningful impact, they tend to associate it with large-scale contributions made by the likes of Nelson Mandela, Gandhi and Mother Teresa who all left an indelible mark on humanity. But the truth is that you don’t need to spend all of your time being a Good Samaritan to make an impact. You can do it in small and simple ways.

If each of us commit to small gestures of kindness, the collective efforts of seven billion people on the planet would be astronomical. In fact, people in lower income groups make up most of the charitable donations in the United States. But, your contribution does not have to monetary. You can also provide time and resources.

Instead of using your finances to measure the value of your contribution, try considering two other major factors:

1. Consider the depth of impact that you had on someone else’s life. It doesn’t matter if it’s one life, or a million, the bottom line is that by giving of yourself, you were able to improve the life of someone else for the better.

2. Measure the impact of your actions by how it made you feel. Did it leave you feeling a sense of satisfaction? Did it help you get in touch with your humanity and feel compassion? Did you experience elevation in your consciousness? 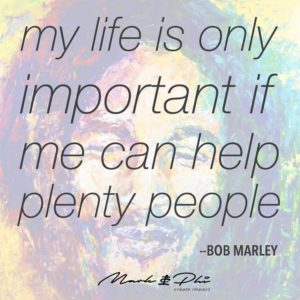 Studies have shown that being generous with others makes us happier. New research by sociologists Christian Smith and Hilary Davidson outlined in their book The Paradox of Generosity proves that making contributions will make you happier in the long run. Americans who volunteer an average of 5.8 hours per month describe themselves as ‘very happy’ and those who describe themselves as “unhappy” volunteer for only 0.6 hours.

You don’t need a platform like celebrities or politicians have. As an active global citizen who wants to see considerable shifts in the world, it’s important to keep in mind that your power lies in your actions, and that most significant changes occur at a grassroots level.

You can start with the issues that are evident in your own backyard – in your own home and community. You don’t need a fancy title or boatloads of cash to get things rolling. All you need is the intention and willingness to take action fueled by a passion for your cause.

Remember, everything that you do matters. A shift in your thinking and behavior can have a ripple effect and shift the global consciousness. The term used to describe the positive effects of internal practices such as meditation and prayer on our environment is known as the Maharishi Effect.

Studies have proven that there’s a direct correlation between meditation, a tool used to bring peace within an individual, and societal harmony. It’s been documented that there’s a reduction in crime rates where at least one percent of the population meditates.

So, if you’re convinced and ready to roll up your sleeves to make a meaningful impact on the world, here are five steps to help you get started:

1. List causes that are most important to you: The most effective way to get involved and stay committed to a cause is by finding the ones that tug at your heart. Another approach is to be honest with yourself about the social  and global issues that disturb you the most. Is it world hunger? Women’s rights? Education? Racial or gender inequality? Care for senior citizens? Animal activism? Preservation of the environment? The list of causes that you come up will reflect the things that you’ll be driven to advocate.

2. Stay informed: As a global citizen it’s important to be aware of what’s happening in the world, especially when it comes to the matters that are important to you. We shouldn’t bury our heads in the sand. If you feel strongly about a particular issue, educating yourself is an essential step. Once you’re aware of what’s happening, you can highlight the issue, become a spokesperson for change, and bring more attention to it, staring with your, friends, family and community.

You can pass on that knowledge on virtual platforms such as social media or write about it in magazines and newspapers. Ultimately, knowledge is power – the more you accumulate, the more informed and influential you’ll be.

3. Using your strengths: You don’t need to change who you are to have a positive influence. You already have what it takes. Tap into your natural strengths, talents and experiences and devise a way to channel them towards your chosen cause. Are you a good writer, speaker or networker? Use your gift of communication to campaign for the matters that are important to you.

Are you an architect or an engineer? Use your skills to help build homes in war torn countries or those that were affected by natural disasters. A counselor or a consultant? Use your gifts to advise or mentor kids who need direction and guidance in their life. With some creative and outside-the-box thinking, you’ll find that there are endless ways that you can use your gifts to create a meaningful impact in the world!

4. Make it fit it into your life: It’s easy to envision the many ways that you can offer yourself in service, but it won’t amount to anything if you don’t know how to ground it in reality. You need to fit these activities into your current lifestyle and make it work within the realm of your personal and professional circumstances. Another important factor to consider is how much of your time, money and energy you are willing to dedicate. Chances are you may not be able to do it all, so I recommend creating a ‘wish list,’ listing all that contributions that you would like to actively support when your circumstances have changed.

Contributions can also be done on an adhoc basis, like donating old clothes, food and other items to charity. As a business owner you can sponsor an event that brings awareness to an issue. You can help out a single mother by volunteering to babysit her kids while she is away at work. Organizations are grateful for donations of any size, so you can arrange to have you account debited every month or so towards the charities you support. Whatever you choose to support, make sure that it enriches you and doesn’t leave you feeling drained and resentful.

5. Seek a supportive community: Generosity and the spirit of giving is contagious. For this reason, placing yourself in an environment where people who share your passion surround you is conducive to furthering change. Together, you’ll have the strength, focus and creativity to mobilize resources and get official bodies to take you seriously. As a united group of campaigners your strength lies in numbers and you can draw from a pool of experience, connections and skills to support your cause.

As you work together, you’ll expand like ripples in a lake to inspire others and instigate change on a wide scale. Anthropologist, Margaret Mead, summarized this phenomenon when she said, “Never doubt that a small, committed group of citizens can change the world; indeed, it’s the only thing that ever has.”

As members of a global ecosystem, it’s our responsibility to do our part in preserving it. The world doesn’t revolve around us – once we accept this truth, we’ll see that there’s a big world out there that’s brimming with opportunities for us to have a meaningful impact. Remove the blinders and allow your heart to lead you to do your part in making the world a better place.

Question: How would you like to create a meaningful impact in the world? What are the first steps that you need to take?